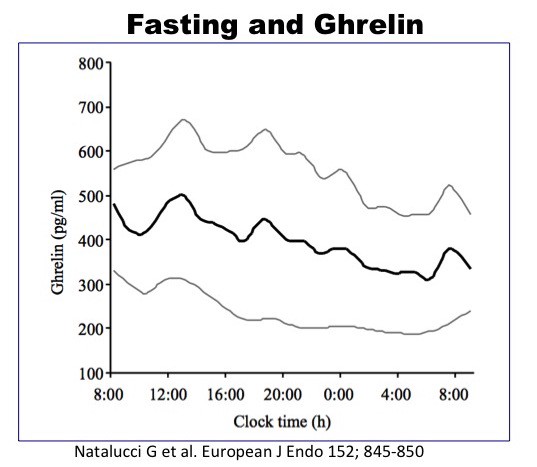 Ghrelin is the so-called hunger hormone, first purified from rat stomach in 1999 and subsequently cloned. It binds to growth hormone (GH) secretagogue receptor, which strongly stimulates GH. So, eating, by itself does not makes you gain lean tissue (like muscle and bone), despite what all the makers of supplements like whey protein and creatine claim. Rather, hunger may be a strong growth stimulus.

Nothing turns off Growth Hormone like eating and you need GH to grow functional tissue. Of course, food provides the nutrients needed to grow, so in fact, you need both feeding and fasting cycles to properly grow. Not all feeding, and not all fasting. Life lies in the balance of the two. The cycle of life is feast and fast. But in today’s world, many people would have you believe that fasting is detrimental to your health, and that you should eat all the time.

The biggest worry about fasting is dealing with hunger. People assume that hunger will get worse and worse until you cannot help yourself and start an IV donut slurry in your garage. Oooh… donuts…. Ghrelin, the hunger hormone, increases appetite and weight gain. It also antagonizes the effect of leptin (in rats at least). Leptin is a hormone produced by fat cells which turns off appetite and makes us stop eating.

Ghrelin turns on appetite. So, if you want to lose weight on a long term basis, you need to tune down ghrelin. If you don’t eat (fast), don’t you get hungrier and hungrier, ghrelin goes up and up and you’ll just gain weight?

Well, no. As we discussed last week, eating all the time sounds like it will turn off hunger and ghrelin. But that’s far too simplistic. Surprisingly, the answer to turning down ghrelin (and hunger) is the opposite — fasting.

Let’s look at this study “Spontaneous 24-h ghrelin secretion pattern in fasting subjects“. Patients undertook a 33 hour fast, and ghrelin was measured every 20 minutes. Here’s what ghrelin levels look like over time.

There are several things to notice. First, ghrelin levels are lowest at approximately 8:00 – 9:00 in the morning.

Circadian rhythm studies consistently find that hunger is lowest first thing in the morning, also generally the longest period of the day where you have not eaten.

This reinforces the fact that hunger is not simply a function of ‘not having eaten in a while’. At 9:00, you have not eaten for about 14 hours, yet you are the least hungry. Eating, remember, does not necessarily make you less hungry.

Next, notice that there are 3 distinct peaks corresponding to lunch, dinner and the next day’s breakfast. BUT IT DOES NOT CONTINUALLY INCREASE. After the initial wave of hunger, it recedes, even if you don’t eat.

Ghrelin shows a “spontaneous decrease after approximately 2 h without food consumption”. This correlates perfectly to our clinical experience in the Intensive Dietary Management Program that ‘hunger comes in waves’.

If you simply ignore it, it will disappear. Think of a time that you were too busy and worked right through lunch. At about 1:00 you were hungry, but if you just drank some tea, by 3:00 pm, you were no longer hungry. I often feel the same level of hunger whether I ate lunch or not — exactly what the ghrelin studies show. Ride the waves — it passes.

Also note that ghrelin does have a learned component since all these subjects were used to eating 3 meals per day. It is not merely by coincidence that these peaks of ghrelin happen. This is similar to the ‘cephalic phase’ of insulin secretion that we’ve discussed previously.

There was one other big finding of this study. Look at the average ghrelin levels over 24 hours. Over the entire day of fasting, ghrelin stays stable! In other words, eating nothing over 33 hours made you no more or less hungry than when you started! Whether you ate or did not eat, your hunger level stayed the same.

Eating more sometimes makes you more hungry, not less. In the same vein, eating less can actually make you less hungry. That’s terrific, because if you are less hungry, you will eat less, and are more likely to lose weight.

So what happens over multiple days of fasting? This study looked at the question specifically. 33 subjects had their ghrelin measured over 84 hours of fasting and they divided the results by men and women, as well as obese and lean.

There were no significant differences between the lean and obese subjects, so I won’t dwell on that further. Once again, there were distinct circadian variations.

Over 3 days of fasting, ghrelin gradually DECREASED. This means that patients were far LESS hungry despite not having eaten for the past 3 days. This jives perfectly with our clinical experience with hundreds of patients undergoing extended fasting in our IDM program.

Everybody expects to be ravenously hungry after fasting multiple days, but actually find that their hunger completely disappears.

They always come in saying ‘I can’t eat much anymore. I get full so fast. I think my stomach shrank’. That’s PERFECT, because if you are eating less but getting more full, you are going to be more likely to keep the weight off.

Notice, also the difference between men and women. There’s only a mild effect for men. But the women show a huge decrease in ghrelin. Again, this addresses one of the major worries that women are not able to fast.

Actually, women would be expected to have more benefit from fasting because their hunger can be expected to decrease better than men. Notice, too, how much higher women’s ghrelin level reaches.

I suspect this correlates to the clinical observation that many more women are ‘addicted’ to certain foods eg. chocoholics. Sugar addicts. etc.

So many women have remarked how a longer fast seemed to completely turn off those cravings. This is the physiologic reason why.

A few other notes about the hormonal changes of fasting. Notice that cortisol does go up during fasting.

Yes, fasting is a stress to the body and cortisol acts as general activator as well as trying to move glucose out of storage and into the blood. So, if too much cortisol is your problem, then fasting may not be right for you.

Insulin also goes down, which is what we expect. Growth hormone, as we’ve previously noted, goes up during fasting. This helps to maintain lean muscle tissue and to rebuild lost protein when you start to eat again.

During intermittent and extended fasting, ghrelin, the main hormonal mediator of hunger does not increase to unmanageable levels. Rather it decreases — which is exactly what we are looking for.

We want to eat less, but be more full. Fasting, unlike caloric restriction diets is the way to do that.