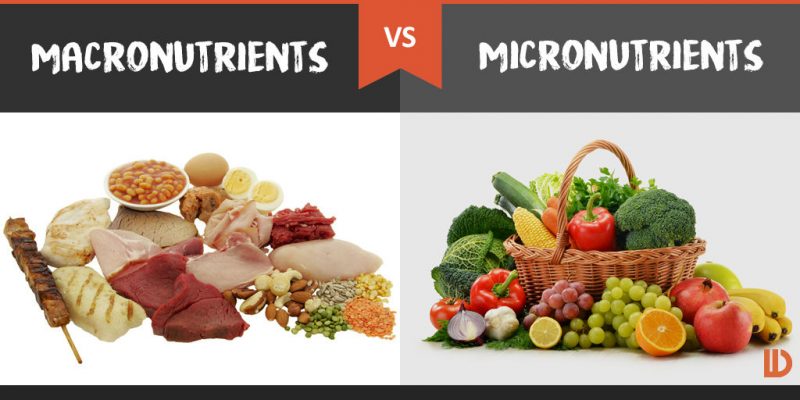 What if we are consistently attributing poor health to the wrong things? Focusing too much on fats and carbohydrates, all the while, important cellular processes in our body are hampered by micronutrient deficiency.

For someone who’s interested in nutrition, I’ve spent a heck of a lot of time obsessing over protein, carbohydrate and fat. And very little time understanding micronutrients.

I don’t seem to be alone in this matter. Popular diets such as Atkins, Weightwatchers & ketogenic diet ALL focus on things other than micronutrients.

So this post is to highlight an issue I didn’t know we had. Which is, by not taking micronutrients ‘seriously’ – we are shortening our potential life span and introducing the risk of illness far earlier into our lives.

The general rhetoric when it comes to micronutrients are:

Which is good advice, and should work.

But first… what are micronutrients?

Essential micronutrients are elements or compounds that our bodies can’t construct from other ingredients (our body is generally very good at synthesising the things it needs). They are used for processes such as energy production, cell repair and enzyme activation (to name just a few). And naturally, without them, we have a problem (!)

Below I’ll focus on the 40 micronutrients essential to humans. Beyond this list, there are more micronutrients, although they are not considered essential humans. That doesn’t however mean they don’t have uses within the body.

Macronutrients are widely talked about. They consist of carbohydrates, proteins and fats. Essentially they are the energy and building blocks for our bodies’ metabolism.

But we can’t run our bodies on macronutrients alone. There’s a range of 40 micronutrients that are essential. They can be categorized into vitamins, minerals, omega-3s and amino acids. Their roles are crucial to perform all kinds of biological functions in our bodies.

Micronutrients come bundled up with the foods we eat. By eating a varied diet, incorporating vegetables, nuts and animal products, we can generally get enough of these micronutrients to live healthily.

But one curious thing about micronutrients, is that we can continue functioning relatively well, even if we’re very low on them.

And that is part of why they get often overlooked. Lets take the comparison of vitamins to coffee.

If a regular person (not a coffee junkie), drinks a coffee, they quickly feel the affects of the caffeine from the coffee in their body.

Compare that to a regular person taking a vitamin pill, packed with micronutrients, they are unlikely to feel anything at all.

Similarly, if you’re deficient of a particular micronutrient for a period of time, you’re also unlikely to feel anything different.

It takes a long time to feel the effects of micronutrient deficiency. But this doesn’t mean the shortage isn’t doing damage. It turns out it is.

What happens if we don’t get enough micronutrients?

We’re generally all familiar with examples of extreme micronutrient deficiency. For example, the story of early sailors who needed to pack limes onto their boats in order to avoid getting scurvy. They only realized the necessity of vitamin C when attempting to subsist for long periods of time on basic foods like potatoes, and then would get sick. Back then they hadn’t isolated the benefits of limes to vitamin C, they just knew limes prevented them getting sick.

This can have varying effects.

At an extreme, for example, being deficient in folate (a micronutrient found in green vegetables), can lead to DNA damage comparable to that of high dose radiation. This was figured out through experimentation in cell cultures1.

And then more subtilely, we have what Bruce Ames named ‘Triage Theory’. And its a much bigger deal than it’s being credited for (see his paper and YouTube talk for more details).

Similar to how hospitals have to triage patient injuries, treating the most life threatening ones first, in order to ensure maximum patient survival. Our body triages how it uses micronutrients, prioritizing the most important functions, to ensure its short term goals of survival and reproduction.

This means that processes useful for living longer take a back seat.

Why do we care about Triage Theory?

Generally speaking, we all want to live as long and as healthy a life as possible.

If we accept what Triage theory posits, then we can help live longer and healthier by avoiding micronutrient deficiencies. Thus giving our bodies the optimum chance to prosper.

What ARE the 40 Essential Micronutrients?

In this section I’m going to do the amazing, but perhaps mind numbingly dense thing of presenting tables of the different micronutrients. If you’ve time and energy, this can be used to compare your diet and vitamin supplements against the list (!). Or perhaps bookmark it and later refer back.

Without identifying the essential micronutrients, we have little hope of remedying their deficiency.

One thing that’s worth noting, is that for many of the micronutrients, there are different sources available. So for example with Vitamin A, its direct form is retinol, but when we consume plants containing carotenoids (the most well known carotenoid being beta-carotene) our body can later convert them into retinol. This idea personally confused me. I was previously of the mindset that each vitamin was a single compound, and you need to consume that compound to meet your needs. Another term for compounds that can be converted into vitamins, is provitamins.

So, onto our micronutrient lists. I’ve broken this up into somewhat arbitrary delineations such as water soluble and fat soluble vitamins. There are 13 vitamins, 25 minerals, 2 omega-3’s, 9 amino acids and choline, all of which are essential.

Typically, lists of micronutrients will stop at the above list of 28 vitamins and minerals. However, Dr Bruce Ames includes omega-3’s, amino acids and choline in his list also. Deficiency in these for humans is very bad.

Choline is an interesting one. Whilst you won’t find it on a wikipedia list of essential micronutrients (yet), it was included by Dr Bruce Ames in all his talks. There is evidence to suggest it is an essential nutrient3. Summarising from the papers abstract, choline is required to make essential membrane phospholipids, and is a pre-cursor for biosynthesis of the neurotransmitter acetylcholine. If its good enough for Bruce Ames to list, we should take it seriously.

How do we use this micronutrient knowledge to live longer?

If we go back to the year 1900, we knew a bit about minerals, but almost nothing about vitamins. It took us until 1912, when Casimir Funk, found the first vitamin (niacin). As the 1900s progressed, we gradually unravelled a list of 40 essential micronutrients.

Going forward there are a number of things we can anticipate happening:

But working with what we have today, there are steps an individual can take to safeguard themselves against micronutrient deficiency:

Firstly, and this should be the #1 priority, aim to eat a diet rich in vegetables (raw and cooked), fish, meat (especially organ meats), eggs and nuts.

On top of your healthy diet, you can “cover your ass” by taking supplements that cover the full spectrum of essential micronutrients.  Thus safeguarding yourself against any dietary omissions. We want to take reasonable, but not excessive amounts of these micronutrients, because too much of them can have negative health consequences.

Due to variation in

In researching this article I was surprised to find there is no blood panel that covers all of the essential micronutrients. The closest thing I was able to come across is the SpectraCell Laboratories micronutrient test, which covers most micronutrients. It covers all 13 vitamins (yay!), and  7 of the 15 essential minerals. Although I’m not sure how important it would be to test sodium, potassium & chloride in a healthy individual (responsible for electrolyte balance). So that leaves 5 minerals; phosphorus, sulfur, iodine, iron and molybdenum that it misses out. It also doesn’t test essential amino acid deficiency or choline deficiency. I don’t think the amino acids and choline are as important, but I’ve emailed SpectraCell to learn a bit more about why these are skipped the aforementioned minerals, and will update the post as I learn more.

This test is only available in the US, and costs $390 – which I thought was quite reasonable. Of course, it will be amazing in the future to get this down to a price that everyone could afford comfortably.

Alternatives to that test are to piece meal various tests together from what you can find available. Additionally, it may be possible to 80/20 the testing, by only getting testing commonly deficient, yet high consequence micronutrients tested. At the time of writing, I don’t know enough to say which micronutrients would cover the 80/20 approach.

Micronutrients and the future

Despite the fact that the information mentioned above has been out in the public domain for some time, its clear that it hasn’t been absorbed by our collective consciousness just yet. This is evidenced by a few things:

This means that we can expect a lot of changes in the future. Generally speaking, I anticipate micronutrient testing and supplementation to become more thorough and routine in order to maintain optimal human health.

This whole theory is quite a lot to swallow. Because if its true, it suggests we can make huge strides towards better health (as a population) with some relatively simple steps. I say “simple”, because a lot of health innovation is predicated upon advanced biological breakthroughs (think gene sequencing, editing and programming). Whereas for this we already have all the technology we need.

So this section is to try and tackle some of the questions that may come up.

Q: What needs to be true (scientifically speaking) for this theory to be accurate?

Q: What exactly do we mean by ‘micronutrient deficiency’?

A: Deficiency could refer to two things. The first is extreme long term deficiency, which results in ilness or bad side effects. For example, a common cause of blindness in developing countries is vitamin A deficieny. The second type of deficiency is less extreme, for example, you could be deficient in vitamin A for just long enough to start getting reduced night vision – one of the early warnings for vitamin A deficiency. According to triage theory, both of these deficiency types could be problematic for long term health.

To know for sure what the specific long term effects of minor vitamin A deficiency are, we would need to run experiments.

Question: What examples do we have to show micronutrient deficiency in the population?

Firstly, its worth noting that obtaining data about the worlds micronutrient deficiences is by its very nature; difficult. Due to the relative expense and invasiveness of the number of blood tests it would take to get an accurate picture. So whatever data we can piece together, it won’t be a complete picture.

Bruce Ames quotes some interesting US figures on nutritional deficiency in his triage theory paper. Initially when I looked into them, I was hopeful they were based on actual blood test data. It turns out however, its data based on surveys of people’s dietary intake, which is then extrapolated upon. When I hear ‘survey’ in science, I immediately want to face palm. However… this isn’t your average survey, so its worth at least hearing out. The data comes from an organisation called NHANES (The National Health and Nutrition Examination Survey), who are run under the umbrella of the CDC (Center for Disease Control & Prevention). This particular data set came from 2003 to 2006 time periods, and covered 18,063 people who submitted complete 24-hour survey data. It shows:

…Will expand on this section further as time goes by. Research is super time consuming, and I don’t want to delay posting what I’ve synthesized so far, in pursuit of making this whole article “perfect”. Already there is enough to be useful to the reader.

This post is purely a synthesis of information already available, and is wholly inspired by the work of Dr Bruce Ames, Joyce McCann, Jung Suh and the rest of their team at Children’s Hospital Oakland Research Institute (CHORI). See the links below to get more info straight from the source: