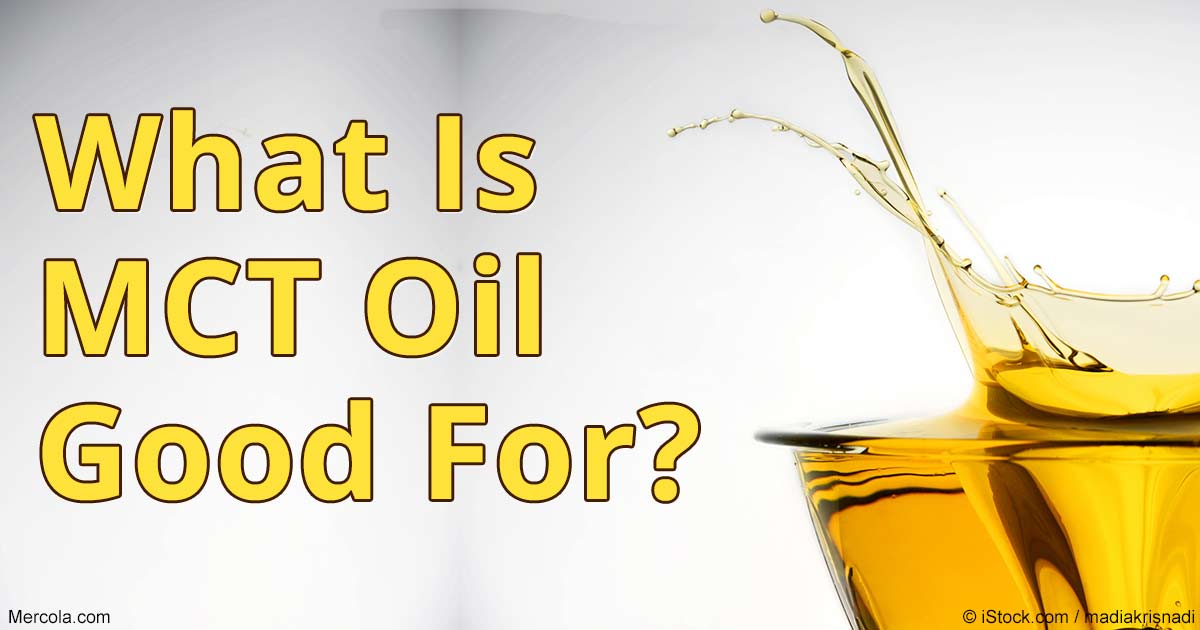 Interest in medium-chain triglycerides (MCT) has grown rapidly over the last few years.

This is partly due to the widely-publicized benefits of coconut oil, a rich source of them.

Many advocates boast that medium-chain triglycerides (MCTs) can aid in weight loss.

In addition, MCT oil has become a popular supplement among athletes and bodybuilders.

Here is everything you need to know about MCTs, including what they are and what health benefits they may have.

MCT oil is a supplement that contains a lot of these fats, and is claimed to have many health benefits.

Triglyceride is simply the technical term for fat. Triglycerides have two main purposes — they are transported into cells and burned for energy, or stored as body fat.

In contrast, the medium-chain fatty acids in MCTs have 6–12 carbon atoms.

These are the main medium-chain fatty acids:

Some experts argue that C6, C8 and C10, which are referred to as the “capra fatty acids,” reflect the definition of MCT more accurately than C12 (lauric acid) (1).

Because of the shorter chain length of the fatty acids, MCTs are rapidly broken down and absorbed into the body.

Unlike longer-chain fatty acids, MCTs go straight to the liver.

There they can be used as an instant energy source or turned into ketones, which are substances produced when the liver breaks down large amounts of fat.

Unlike regular fatty acids, ketones can cross from the blood to the brain. This provides an alternative energy source for the brain, which ordinarily uses glucose for fuel.

Because the calories contained in MCTs are more efficiently turned into energy and used by the body, they are less likely to be stored as fat.

Bottom Line: Due to their shorter chain length, medium-chain triglycerides are more rapidly broken down and absorbed into the body. This makes them a fast energy source and less likely to be stored as fat.

There are two main ways to increase the amount of MCT in your diet — through whole food sources or supplements such as MCT oil.

These foods are the richest in medium-chain triglycerides, shown as the percentage of fatty acids that are MCTs (2):

Although the sources above are rich in MCTs, their compositions vary. For example, coconut oil contains all four types of MCTs, plus a small amount of LCTs.

MCT oil is a highly concentrated source of medium-chain triglycerides.

It is man-made, through a process called fractionation. This involves extracting and isolating the MCTs from coconut or palm kernel oil.

Caproic acid (C6) is not normally included due to its unpleasant taste and smell. Lauric acid (C12) is often missing or present in only small amounts (4).

Given that lauric acid is the main component in coconut oil, be careful of manufacturers who market MCT oils as “liquid coconut oil,” which is misleading.

Many people debate whether lauric acid reduces or enhances the quality of MCT oils.

Many advocates market MCT oil as better than coconut oil because caprylic acid (C8) and capric acid (C10) are thought to be more rapidly absorbed and processed for energy than lauric acid (C12).

Since C13 is a long-chain fatty acid and lauric acid (C12) is quite similar in structure, some experts argue that it might act more like a long-chain fat, making it less valuable.

Although evidence supports that lauric acid is more rapidly absorbed in the body than LCTs, one study suggests that lengthening the carbon chain by 2 carbons can slow down the rate of diffusion by 100 times (5, 6, 7).

Therefore, compared to other medium-chain triglycerides, lauric acid may be a slightly less efficient way to obtain energy. However, it also has unique health benefits.

For example, lauric acid has even more anti-microbial properties than caprylic acid (C8) or capric acid (C10), meaning it can help kill harmful bacteria and viruses (8, 9).

Bottom Line: MCT oil is an easy way to get large concentrations of certain MCTs. It usually contains C8, C10 or a combination of the two.

Which Should You Choose?

The source best for you depends on your goals and the amount of medium-chain triglycerides you want.

If your aim is to achieve overall good health, using coconut oil or palm kernel oil in cooking is probably sufficient.

However, for higher doses you might want to consider MCT oil.

One of the good things about MCT oil is that it has virtually no taste or smell. It can be consumed straight from the jar or alternatively mixed into food or drinks.

Another great thing about MCT oil is the price.  This 32 ounce bottle  at  Amazon is around $24.  That’s nearly 9,000 calories in the bottle, which is the calories most people consume in 4-5 days.  So per calorie, its less $ than McDonalds!

MCT Oil May Help With Weight Loss in Several Ways

There are several ways that MCTs may help with weight loss, including:

Do MCTs Actually Cause Weight Loss?

In a review of 14 studies, 7 evaluated fullness, 8 measured weight loss and 6 assessed calorie-burning.

Only one study found increases in fullness, while 6 studies found reductions in weight and 4 found increased calorie burning (20).

In addition, the amount of weight loss caused by MCTs is actually very modest.

Another study found that a diet rich in medium-chain triglycerides resulted in a 2-lb (0.9-kg) greater weight loss than a diet rich in LCTs over a 12 week period (22).

Further high-quality studies are needed to determine how effective MCTs are for weight loss and what amounts need to be taken to experience benefits.

Bottom Line: A diet high in medium-chain triglycerides may help with weight loss, although the effect is generally quite modest.

MCTs are thought to increase energy levels during high-intensity exercise and serve as an alternative energy source, sparing glycogen stores.

This may positively affect endurance and have benefits for athletes on low-carb diets.

Additionally, consuming food containing MCTs instead of LCTs for 2 weeks resulted in longer duration of high-intensity exercise among recreational athletes (24).

Although the evidence seems positive, there are not enough studies available to confirm this benefit, and the overall link is weak (25).

Bottom Line: The link between MCTs and improved exercise performance is weak and more studies are needed to confirm these claims.

The use of medium-chain triglycerides and MCT oil has been associated with several other health benefits.

MCTs have been linked to lower cholesterol levels in both animal and human studies.

Improvements in cholesterol and antioxidant levels may lead to a reduced risk of heart disease over the long term.

However, it is important to note that some older studies report that MCT supplements had no effects or even negative effects on cholesterol (30, 31).

Bottom Line: Diets high in MCT-rich foods like coconut oil may have benefits for cholesterol levels. However, the evidence is mixed.

However, evidence for the use of medium-chain triglycerides in diabetes is limited. More research is needed to determine its full effects.

MCTs produce ketones, which act as an alternative energy source for the brain and can therefore improve brain function.

Recently there has been more interest in the use of MCTs to treat or prevent brain disorders like Alzheimer’s disease and dementia (34).

One major study found that MCTs improved learning, memory and brain processing in people with mild to moderate Alzheimer’s disease. However, this was only effective in people containing a particular gene, the APOE4 gene (35).

Overall, the evidence is limited to short studies with small sample sizes, so more research is needed.

Bottom Line: MCTs may improve brain function in people with Alzheimer’s disease who have a particular genetic make-up. More research is needed.

Because MCTs are an easily absorbed and digested energy source, they’ve been used for years to treat malnutrition and disorders that hinder nutrient absorption.

Evidence also supports the use of MCTs in ketogenic diets treating epilepsy (36).

The use of MCTs allows children suffering from seizures to eat larger portions and tolerate more calories and carbs than on classic ketogenic diets (37).

Bottom Line: MCTs are effective at treating a number of clinical conditions including malnutrition, malabsorption disorders and epilepsy.

Dosage, Safety and Side Effects

MCT oil appears to be safe for most people.

It is not clear what dose is needed to obtain potential health benefits, but many supplement labels suggest 1–3 tablespoons daily.

There are currently no reported adverse interactions with medications or other serious side effects.

However, some minor side effects have been reported and include nausea, vomiting, diarrhea and an upset stomach.

These can be avoided by starting with small doses, such as 1 teaspoon, and increasing intake slowly. Once tolerated, MCT oil can be taken by the tablespoon.

Some sources discourage people with type 1 diabetes from taking medium-chain triglycerides due to the accompanying production of ketones.

It is thought that high levels of ketones in the blood may increase the risk of ketoacidosis, a very serious condition that can occur in type 1 diabetics.

However, the nutritional ketosis caused by a low-carb diet is completely different than diabetic ketoacidosis, a very serious condition caused by a lack of insulin.

In people with well-controlled diabetes and healthy blood sugar levels, the amount of ketones remain within a safe range even during ketosis.

There are limited studies available that explore the use of MCTs in type 1 diabetes. However, some have been conducted with no harmful effects (38).

Bottom Line: MCT oil is safe for most people, but there are no clear dosage guidelines. Start with small doses and gradually increase your intake.

For these reasons, adding MCT oil to your diet is highly recommended.