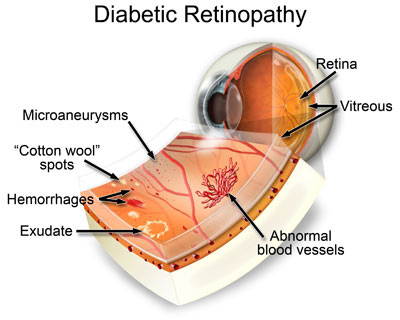 Nicotinamide adenine dinucleotide (NAD+) is a coenzyme found in the cells of all living creatures (3,4) and is critical for communication between the cell nucleus and the mitochondria that power the cells (5,6,7)

LOWER NAD+ LEVELS AS WE AGE

Everyone experiences lower NAD+ levels throughout the body as we age, effecting the communication within every cell of our bodies.

Scientists have known for some time that this loss of NAD+ leads to many different age related diseases as the cells lose ability to perform basic tasks and repair damage due to oxidative stress. (8)

In addition to the chronic age related diseases found to be related to declining NAD+ levels, the study below finds impaired NAD+ biosynthesis in many diverse retinal diseases among young and older mice.

NAMPT-Mediated NAD+ Biosynthesis Is Essential for Vision In Mice

This study published in cell magazine published sep 27, 2016 found that

Vision depends on the 2 classes of photoreceptors the rods and cones. Many different diseases such as Retinitis Pigments (RP), Age-Related Macular Degeneration (AMD), Rod and Cone Dystrophies, and Leber Congenital Amaurosis (LCA) all attack the photoreceptors thru diverse pathways that lead to photoreceptor death and blindness.

Photoreceptors are known to have high energy requirements, but limited reserves so are dependent on constant synthesis of NAD+ to meet energy needs. (Ames et al., 1992, Okawa et al., 2008)

The authors theorized that NAD+ biosynthesis plays a key role in healthy vision. They noted that the leading cause of blindness in children, LCA, is caused by a mutation in the enzyme NMNAT1 which results in impaired synthesis of NAD+.(Falk et al., 2012, Koenekoop et al., 2012, Sasaki et al., 2015)

In mammals, NAM is catalyzed by nicotinamide phosphoribosyltransferase (NAMPT) as the first step in biosynthesis of NAD+.

In this study, researchers created knockout mice that lack NAMPt in rod photoreceptors which disrupts the normal NAD+ biosynthesis, resulting in a 26-43% reduction in retinal NAD+ levels.

Within 6 weeks, these mice exhibited significant photoreceptor death and vision loss. The results very closely matched the degeneration seen in patients with Retinitis Pigments and other degenerative vision disease.

According to the authors:

To confirm the cause of vision loss, researchers supplemented knockout mice with daily injections of NMN, bypassing the need for NAMPT in the first step of NAD+ synthesis. Those mice receiving NMN experienced significant recovery of retinal function.
(Figures 3A–3C).

NAD+ DEFICIENCY IS COMMON IN MANY RETINAL DISEASES

Researchers were able to determine that NAD+ deficiency is common in many vision problems.

These findings support the idea that NAD+ deficiency may be a shared feature of retinal dysfunction.

After demonstrating that light induced retinal dysfunction was linked to decreased NAD+ levels, researchers were able to show that supplementation to increase NAD+ could protect against retinal damage.

Mice that were given injections of NMN for 6 days prior, and 3 days after light exposure exhibited improved retinal function vs those that did not receive NMN injections (Figures 4A–4C).

[box]Conclusion: Results from this study suggest that supplementation to increase NAD+ deficiencies can help repair macular damage and may be an effective treatment for many common degenerative vision problems.[/box]

This study was very specific for the impact of NAD+ on Retinal disease in Mice, but is also further evidence that the absence of sufficient NAD+ has dire consequences, and that replacement of NAD+ can repair damage.

Researchers are experimenting with various techniques for raising NAD+ levels in mice and humans such as:

You can read more about Nicotinamide Mono-Nucleotide (NMN) here.

NICOTINAMIDE RIBOSIDE
Other studies with mice and human subjects use supplementation with Nicotinamide Riboside (NR) to raise NAD+ levels.

NR is a precursor the body can use to manufacture NAD+. It has been shown to be safe and effective at raising NAD+ levels in humans in dosages of around 250mg a day.

Recent studies have demonstrated that the enzyme CD38 becomes elevated as we age, possibly in response to increasing inflammation levels, and corresponds with declining NAD+ levels.

QUERCETIN
Flavonoids such as Quercetin are proving effective at lowering CD38 levels which results in higher circulating levels of NAD+ in the bloodstream.

Dr Sinclair recently published this article on CD38 and concluded that:

Conclusion: Inhibiting CD38 to prevent NAD+ destruction AND supplementing with NAD+ precursors so the body can create more NAD+ is a promising new avenue in the anti-aging battle