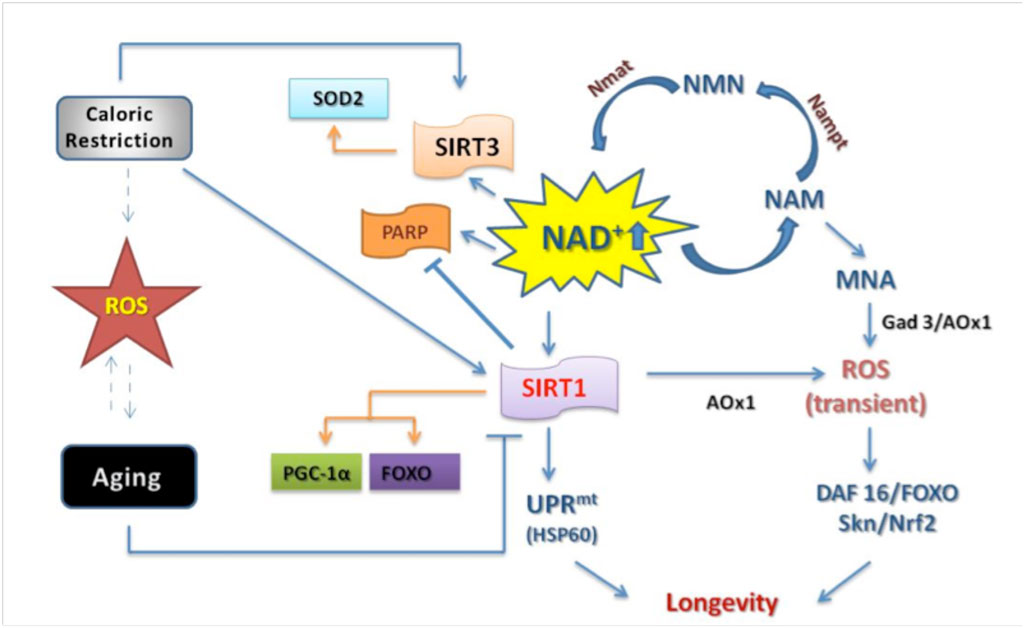 Nicotinamide Riboside  (Niagen) has shown the ability to elevate the co-enzyme NAD+ levels in clinical studies with Mice many times, but in a series of research described in this PHD thesis, has now been proven to have the same effect in humans.

Several experiments were carried testing response to NAD+ levels in both human and mouse test subjects.

In one, a human subject was given 1000 mg of NR daily for 7 days, and blood NAD+ levels were tested. It was found that the single dose of Nicotinamide Riboside raises NAD+ levels up to 270%.

Further testing involved 6 male and 6 female adults. Subject received 100 (purple), 300 (red), or 1000mg (black) of NR, with a 7 day washout period between doses to monitor the response on NAD+ levels.

Subjects showed the increase to NAD+ levels was dose dependent.

The lead researcher, Charles Brenner, PhD, was somewhat surprised that a single dose of 100 mg was able to raise NAD+ levels, however it seems the 300mg dose was much more effective over a 24 hour span.

The 300 and 1000mg dosages resulted in similar maximum increase in NAD+ levels at 24 hours. However the 1,000 mg dose resulted in higher increase at 8 hours.

As participants were given a single dose, with a washout period of 7 days between dosages, it is not known what the cumulative effect of daily dosages would achieve.

The optimum dose for maximum NAD+ elevation with minimum NR dosage is likely closer to 300 mg than 1,000 mg. A cost effective guess would be 300 to 500mg per day.

Read more about the optimum dosage of NR here.

Other studies for proper dosage of NR

Among the dozens of studies underway currently, one involves NR  taken daily for eight consecutive weeks  is underway to measure the long term NAD+ increase from NR and determine the most effective dosage.

Prior research has shown supplementation with NMN can raise NAD+ levels and result in  more youthful cellular function thru improved mitochondria health.  NAD+ levels naturally drop as we age and is thought to be a key driver in many age related diseases and health problems.  Restoring NAD+ levels to youthful levels has proven to work in restoring youthful energy and performance in mouse studies.

NAD+ is a key factor in cellular health as it is required to power all activity in every cell of our bodies.

Increased NAD+ levels is key to maintaining healthy cellular activity and mitochondrial function. Besides the decrease in NAD+ levels due to aging, they are also used up when battling chronic problems such as cancer.  When this happens, the mitochondria are less effective which causes many health problems.

One example is shown in a mouse study published in November 2014  that showed  NR was effective at restoring NAD+ levels in mitochondria in mice that suffered from the  accelerated aging disease known as Cockayne Syndrome (CS).  NR was described to show promise as a therapy for the disease in addition to other chronic health problems that result in lower NAD+ levels.

Below are some of the benefits that have been proven to result from increased NAD+ levels in studies with mice.

have been completed showing:

Testing in humans for any potential Anti-Aging benefits is further down the road, due to the extreme cost and time involved.  Also, the FDA does not recognize aging as a disease, so any proof that it may slow or even reverse aging cannot be claimed.

However,  more short term testing for specific age-related disease and conditions is ongoing in Humans and Mice.

Niagen is manufactured by Chromadex and  is the only supplier of NR, with multiple patents from Dartmouth College, Cornell University and Washington University.

There are many different brands of Nicotinamide Riboside on the market, but all use the same ingredients supplied by Chromadex.