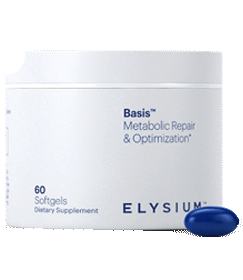 As we age, levels of the co-enzyme Nicotinamide Adenine Dinucleotide NAD+ drop significantly in multiple organs, which disrupts our bodies ability to fight inflammation, disease, and physiological decline  (5,8,10).

NAD+ decrease is described as a trigger in age-associated decline(23), and perhaps even the key factor in why we age (5).

In 2013, Research published by Dr Sinclair  of Harvard stunned researchers by showing that short term supplementation with Nicotinamide MonoNucleotide (NMN)  reversed many aspects of aging, making the cells of old mice resemble those of much younger mice, and greatly improving their health.

Since then, dozens of other studies have been published investigating the efficacy of supplementation with NAD+ precursors such as NMN and Nicotinamide Riboside (NR) in treatment and prevention of a wide range of disease including cancer, cardiovascular disease, diabetes, Alzheimers, Parkinsons, and more (5,6,7,9,10,11,13,14,15,16,23).

NR and NMN are precursors that are used by our bodies to replenish NAD+ levels.

In 2004 Dr Charles Brenner published a paper showing that the enzyme Nrk1 can catalyze NR directly to NMN (100) which might make it a much more effective precursor to NAD+.  Although NR is unstable by itself, Dartmouth University has patented production methods that combine it with Chloride which makes it stable.

Chromadex has licensed this technology and has been selling NR commercially since 2014 under the brand name “Niagen”.

Basis is the brand name used by Elysium Health to market their Nicotinamide Riboside product.

NAD+ is a key co-enzyme that the mitochondria in every cell of our bodies depend on to fuel all basic functions. (3,4)

NAD+ play a key role in communicating between our cells nucleus and the Mitochondria that power all activity in our cells (5,6,7)

As we age, our bodies produce less NAD+ and the communication between the Mitochondria and cell nucleus is impaired. (5,8,10).

Over time,  decreasing NAD+ impairs the cell’s ability to make energy, which leads to aging and disease (8, 5) and perhaps even the key factor in why we age (5).

The NAD+ supply is not stagnant – it is constantly being consumed and replenished, with the entire NAD+ pool being turned over 2-4 times per day (14).

This recycling is through the salvage pathway, where the enzyme Nampt catalyzes NAM to NMN, which is then metabolized to NAD+.

Nampt is the rate-limiting step in the salvage process (97).

Many studies have confirmed the importance of Nampt in maintaining sufficient NAD+ levels, such as the quote below from a 2016 study that used mice lacking Nampt in muscle fiber:

These mice exhibited normal muscle strength and endurance while young, but deteriorated rapidly as they aged which confirmed Nampt is critical to maintaining NAD+ levels.

NR had been known for decades, but was not thought to be that important until 2004 when Dr. Charles Brenner discovered the enzyme NRK1 can phosphorylate NR directly to NMN, bypassing the Nampt “bottleneck” (100).

This newly discovered “shortcut” in the NAD+ salvage pathway found that NR can be metabolized directly to NMN to boost NAD+ levels more effectively than NAM.

Even when taken at very high dosages, NR has not been detected in the bloodstream in any research (97,98,99).

Note:NAM does elevate NAD+, but is on the “wrong” side of the Nampt bottleneck, which limits it’s effectiveness

1000s of articles have teased us with the possibility that taking Niagen could halt or maybe even actually reverse some of the signs of aging. Of course there is a lot of skepticism with such claims.

Chromadex has been producing the only commercially available form of Niagen and supplies it to 20 or more different companies that put their own brand name on the bottle and sell to customers.

Elysium Health is only one of these sellers, although they have fairly deep pockets and extensive connections among top researchers in the field.

They have also enlisted 6 Nobel Laurete scientists to serve as advisors to the company, which lends a great deal of credibility.

However, these scientists have had no significant role in researching,creating or testing Basis or either of the ingredients used.

Elysium Health makes a change to the formula for Basis

Basis contracted to buy Nicotinamide Riboside Chloride (often referred to as NR, or the brand name Niagen), and combine it with another off the shelf product from Chromadex, Pterostilbene.

But in June 2016, Elysium got into a contract dispute with Chromadex and later sued Chromadex for abusing the patent process.

Their goal seems to be to invalidate Chromadex patent(s) so they could produce their own version, which appears to be what they are doing now.

Elysium has changed the product information on their website to list “Nicotinamide Riboside”, without the Chloride.  A key patent Chromadex has licensed the rights to involves adding the Chloride to make it more stable.

This new ingredient used by Basis likely has the same effects in the human body, but we don’t really know for sure.

It seems Elysium Health plans to go forward with this revised formula for now, and continue to use previous test results obtained with their prior  formula that used Chromadex Nicotinamide Riboside Chloride.  It will be interesting to see how that strategy holds up going forward.

So now they have changed their product to use a slightly different ingredient, but want to smooth it over and not cause customers to worry about it.

Their answer is to portray the change as something they did on purpose – to MAKE THE PRODUCT BETTER.

When a customer questioned the change, this is how they answered on their Facebook page:

Thank you for reaching out to us with your questions. I’d be happy to provide additional information for you here!

From the start, Elysium has always been committed to bringing superior, high-quality supplements to market. As part of that effort, we have established a new supply chain, located in the United States, that utilizes a proprietary process to produce Nicotinamide Riboside — the first of its kind for the production of Basis, and this does fully meet the GMP standard as outlined by the FDA. We believe our vertically integrated supply chain benefits our customers as it enables us to better manage manufacturing, packaging, shipment and eventually the expansion of our new product line.
While the specific Basis formulation and the amount of each ingredient have not changed, this new production process has allowed us to take an exceptional product and make it even purer. This reflects our ongoing commitment to being a trusted source for our customers by continually exceeding the highest standards in the industry.

In regard to your question about GMO’s, this does not apply to Basis as we don’t have food products in our ingredients eligible for genetic modification. Basis is produced by nature identical synthesis, meaning that the active molecules are constructed to be nature identical. This process is preferable to attempting to distill down the ingredients from food as the final product is purer than what the bi-product would be via distillation.
If you have other questions or if there is anything we can do to help, my team can be reached directly here or by email at care@elysiumhealth.com or phone at 888-220-6436.

Pretty slick, I thought. No, they didn’t substitute something they just threw together to get around the patent and supply problem – they made something more pure and trustworthy.

I don’t know who is going to with the legal battles between Chromadex and Elysium Health, but I see Elysium as way ahead in the marketing department even if I don’t really trust their honesty.

WHY BASIS – IS IT BETTER THAN OTHER BRANDS?

You’ll find very little mention of Niagen in the sales and marketing literature about Basis.

Elysium would like you to think that Basis is some exclusive formula created by their founders.

In fact, they purchase Niagen from Chromadex like several other brands.

The research and testing that has generated so much excitement has been done with Nicotinamide Riboside from Chromadex.

There has been no research published to show that Pterostibene makes Niagen work any better.

[box]Conclusion: ALL Niagen comes from Chromadex, there is no proof that Basis is any more effective than other brands of Niagen.[/box]

Basis is available only thru their website for $60 a bottle, which would last for one month if taking 2 pills per day (250mg of Niagen).

Recent research indicates that the optimum dosage for maximum increase in NAD+ levels is at least 250mg per day, or more.

In fact, the best evidence on recommended dosage will hopefully soon be available from a recently completed study sponsored by Elysium Health themselves.

This study of 120 elderly patients tested blood NAD+ levels of 250mg and 500mg of Elysium Health Basis vs placebo.

IS IT WORTH THE EXTRA COST?

If you know that Basis is Niagen + Pterostilbene, and start searching for “Niagen”, you quickly realize you can get the same thing for 1/2 the cost or less elsewhere.

[box]Conclusion: Since ALL Niagen comes from Chromadex, there is no difference in the quality among brands[/box]

What does Basis do?

The field of Anti-Aging supplements is littered with scams and hoax products that are supposed to miraculously stop the aging process.

It is for that exact reason that Elysium Health DOES NOT market Basis specifically as an anti-aging pill.

Rather, they focus on some specific areas that their pill may help with such as:

28 thoughts on “Is Basis by Elysium Health a Hoax?”